Becoming a DJ Guide, A 'How To' For Getting Started - DJ Music Geek
0

Becoming a DJ Guide, Getting Started

If you’re a fan of clubbing and like to go dancing every weekend, you’re probably wondering about what does the trade of a Disc Jockey imply. Disc Jockey is just another way of saying DJ, a name most of us are probably familiar with. A DJ’s main job is to “play with the discs” or, in more modern terms, to mix different songs and create a unique track. 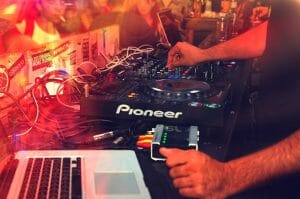 There’s a bit of history behind this profession as well. It all started with the introduction of the term “disk jockey” in distant 1914 – the first DJs’ job were radio personalities who introduced phonograph records on air. After that, DJ-ing has migrated towards the live arenas, and these people started playing records at parties and events.

In the 1960s, the first DJ mixer was created, and in 1970, the first DJ-oriented turntables were manufactured. The rest is history – the trade of the DJ was now more of a profession than ever, as a whole division of the audio equipment industry was oriented towards it. Infamous techniques such as scratching and beat juggling were also patented in the 1970’s.

At the beginning of the 90’s, the first mp3 player was patented, and DJs were then capable of working with digital files instead of vinyl. Some die-hard vinyl fans were hard to convince to switch to the digital medium, but this has definitely brought a new era in the DJ-ing industry. Nowadays, there are both DJs who stick to working with vinyl and ones who use digital media – although the latter are considered to be more advanced professionals.

The name Disc Jockey was used for the first time in the 1920s, and the “disc” used to stand for the phonograph records that were used at the time. As time has passed, and CDs and other digital media took the place of vinyl records, the term lost its meaning, but it still refers to any form of playback that modern DJs use.

So, what exactly does a DJ do? A DJ specializes in creating mixes within one or multiple genres of music. Some might think that being a DJ implies only the vast spectrum of electronic club music – from trance to drum&bass. However, there are DJs who mix pop, rock, contemporary R&B, even hip-hop, and many of them don’t even limit themselves to one single genre. A beginner will usually not be able to master mixing two different genres of music, but with a bit of experience, everything is possible.

When one chooses the profession of DJ, they are usually driven into it by their passion for music – which is usually one broad genre. That’s why it can be hard to find a DJ that plays both club music and rock music – as they would have the knowledge, libraries, and techniques that fit into their specific niche. In other words, you cannot contact a DJ specializing in electronic music and ask them to play rock at your party. 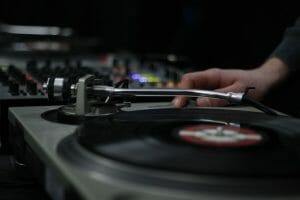 To become a DJ, one needs to take a more or less classic career path. They have to gain experience first, and it can be done in a couple of ways – either by self-training, by going to a specialized school or becoming the apprentice of a professional. After that, one has to invest in the minimum equipment that any DJ needs to have in their inventory.

This includes a good, performance laptop, a DJ software to work with, a pair of turntables, a mixer and headphones. Besides these, they can also invest in controllers, a library of records if they are working with vinyl or other advanced equipment. However, this is not always needed, as some venues will have their own equipment which the performing DJs will be allowed to use.

Many people argue whether an education in the audio industry field is needed to become a DJ. Getting a degree in radio broadcasting or audio engineering can be a bit of beating around the bush when trying to become a DJ. One will be stuffing one’s head with lots of technical details and information, most of which will not be necessary for becoming a DJ. However, many people state that this kind of education will offer one an advantage, as they will know a lot more about the technical aspects than anyone who hasn’t completed such a degree.

There’s also the fact that many venues will not accept a job application that does not have a professional certification regarding the person’s skills. Nonetheless, besides actual college degrees, there are also specialized DJ courses that can offer this kind of certification. These usually last less, usually up to 1 year, and will have a more relaxed atmosphere.

Some DJs prefer not to get a professional education, and it’s entirely up to them. In the end, the greatest geniuses of the world were school dropouts! There are two paths one can take if one does not want to get a professional education: self-teaching or apprenticeship under a pro. Self-teaching is very easy to do nowadays – everything you need is a computer, an internet connection, and lots of free time to do your research. You would also need to have a bit of savings to buy your starter’s kit, which is usually just a mixer and some kind of software. The other way is a bit more troublesome – DJs would have to get in touch with local professionals and ask them for lessons. It might be hard to find someone willing to take you under their wing, as it requires lots of time and effort. Some may deny the request, others may ask for fees, and others may do it for free – all one needs to do is get in touch with as many professional DJs as possible.

Once one has undergone some kind of education, the young DJs are in search of their first job. Again, there are several aspects they have to take into consideration. Firstly, there are the legal aspects that depend on their country’s laws. Some countries will require them to have a digital license that will allow them to play music for an audience, and other countries, the US included, will have the venue take care of these royalties. Researching the legal stuff might be tiresome and boring, but it will spare the beginners of unexpected lawsuits in the future.

When looking for a job in the DJ industry, there are a couple of options- either a permanent contract with a venue or a self-employed state, when one can just wait for proposals from different events and venues and work for temporary contracts. Beginners usually have only the first option, as they are not popular enough to be self-employed. They can work their way up to becoming self-employed DJs, and afford to choose their own contracts at their preferred venues and events.

When it comes to money, you might wonder how much do DJs make. The answer differs depending on the experience of the DJ, their skills, and their popularity. Beginners would need to have a part-time job to sustain themselves, as they would probably make under $17,000 per year with their first contracts. The medium wage among DJs is around $26,000 per year, but self-employed people can even earn six-figure salaries. 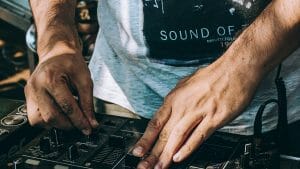 A DJ will also have to market themselves in a constant manner. Nowadays, it’s as easy as creating a business page on social media, and uploading your mixes to platforms such as SoundCloud. Grace to the Internet, DJs can even market their music behind the borders of their city, state, or even country. Some will even get invitations to perform outside of their towns if their music is noticed by big venues. Marketing is a very important step for DJs – and one who does not constantly promote their music will be bound to the same contract and position for years.

There are several main types of DJs:

1. Club DJ
The club DJ is usually the person you will see mixing dance beats in the club every Saturday night. These people can work with any media, from vinyl to digital, but most prefer digital. They need to have a well-developed sense of rhythm and tempo, so as to create engaging beats that will make the crowd dance and jump.

2. Party DJ
The party DJ is the person whom you will ask to perform at your personal party. Be it a wedding, a corporate party, or any other kind of private social gathering; the party DJ will have to adjust his audio library to the crowd’s tastes and communicate with them a lot more than a club DJ would. This means that party DJs usually have way less freedom than club ones, as they are sometimes asked to play one track or another.

3. Internet DJ
Grace to the internet, DJs can now perform online. That’s right – they can even use virtual turntables and software to perform for radio station of any live broadcast on the web. However, this can be a bit of a challenging job, as you don’t have any feedback from the crowd, maybe except the listener count. It is also more of a side job – as being a virtual DJ may be something club DJs do in the daytime.

4. Virtual DJ
Back to the origins of this name and profession, a virtual disc jockey is the person who creates the playlists you hear on the radio. With the help of virtual turntables instead of real ones, these people have to know the target audience of a certain station and adjust their music into that niche. Virtual DJs have to walk the thin line between staying popular enough and keeping to a particular music genre or atmosphere that the radio station wants to create; once they mix these two ingredients, success is guaranteed!

This would be everything one needs to know about the profession of a DJ – from the history of the name and industry to the steps one should take to success. When it comes to DJs, it’s important to know that it’s not easy being one. It takes a lot of time and money to get the right education and purchase your technical kit, and it usually does not pay off in the first couple of months. The DJ industry is highly competitive nowadays, so the ones who don’t keep improving, marketing themselves and making contacts with the industry are bound to oblivion. However, someone who keeps their finger on the pulse of the music industry can easily make it big – either as a club, party, radio or Internet disc jockey.