CD vs Vinyl – Which is Better?

Nowadays, most DJs tend to stir themselves towards the digital end of the spectrum, both in terms of music and technique. Without a doubt, digital is much cheaper and much easier to master for a beginner – but there are still die-hard fans of analog music and mixing devices. Today, we’re going to tackle the age-old question of CDs vs vinyl, for those who prefer a more hands-on approach to mixing. Without further ado, let’s get straight into it: 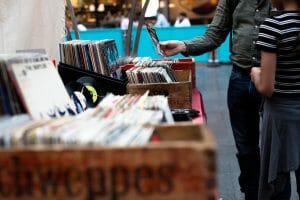 Vinyl is a classic -it has been around for over 50 years now, and the sound quality of most vinyl records is superior to that of digital files – should they come from a CD or straight from your computer. Moreover, lots of old-school DJs swear by turntables and analog mixers, saying that nothing can feel as real as controlling the mix with your own fingertips. Romanticism aside, there is actually a grain of truth to that – there are a number of techniques that can’t be perfectly replicated with software – but that is not to say you absolutely cannot DJ without them.

As for CDs, they have been around for a bit over twenty years right now, and they’re still widely available nowadays. The sound quality of a CD is usually better than that of regular digital formats you might work with on your computer, but it’s hardly noticeable for the crowd. You can still use some traditional techniques with CDs, including scratching and juggling, and most controllers out there have CD decks (so it doesn’t require two whole extra pieces of hardware, aka turntables, like vinyl does.)

Let’s talk accessibility and convenience. If you’ve ever seen a vinyl record, you know they’re pretty large and fragile on top of that. Considering that you want your set to last between one and two hours, you would need at least half a dozen records – and many more if you’re more experimental in your mix. Besides being heavy and hard to carry around, vinyl is not as popular anymore – meaning there’s a high chance that you don’t own a single record yet. Investing in a record collection takes lots of time and money – something which not many newbies can sacrifice. CDs are definitely the better option when it comes to convenience – they’re rather small, not as fragile, and still widely available and produced.

Lastly, there’s BPM detection. BPM detection can help you out a lot, especially at the beginning, and it’s a really nifty feature that most CD decks have built into them. Vinyl doesn’t allow easy BPM reading (unless you use your mixer and a software at the same time, but that is rather uncommon), which can make it even harder for newbies to learn how to mix properly. Seasoned DJs do not need BPM reading, as their experience allows them to recognize it as they go.

In the end, there is no right answer to which one is better – vinyl or CDs. However, we’d say that, if you’re a complete beginner and you haven’t inherited a 200-record library, go with CDs. If you’re an experienced DJ that doesn’t mind carrying a bunch of records around, and chooses sound quality and technique over anything else, vinyl would be better for you.